When people ask me what my favorite film is, I often break into a cold sweat. How can I possibly choose?! Do I reveal how much of a film nerd I am?! What if I forget one of my favorites and the person asking never knows how I really feel?!

So, in order to avoid this question, here’s a list of my favorite films. These films change depending on my stage of life, what I’ve watched recently, or what creative projects I’m working on– so check back every once in a while!

Here they are, in no particular order:

Like Martin Scorsese’s other films, The Age of Innocence focuses on brutal aspects of society. However, rather than being affected by violence the characters in The Age of Innocence are affected by the unspoken codes of society. The film is not one of words said and moments had, but rather silences and moments lost. Additionally, Scorsese employs old, silent-film-esque formal film techniques such as vignettes, dramatic lighting, and non-traditional editing. These little touches make the film seem perfectly crafted, just like the world it takes place in.

Every time I watch the opening shot of Cinema Paradiso I can feel myself holding my breath. The film is indulgent, nostalgic and speaks to everything I love about film. The loving relationship between the young boy, Toto, and Alfredo the film projectionist highlights the joys to be found in the simple things in life. After watching this film, I feel more conscious of the world around me as well as ever-aware that the best things in life are fleeting. Ennio Morricone’s soundtrack may be my all-time favorite.

The plot of Akira Kurosawa’s Redbeard is simple: a young doctor serves his residency in a tiny clinic in a remote area of Japan that primarily serves those who live in poverty. With the help of his mentor, Redbeard, he comes to understand what people can do for each other. This film is one of those that makes me a better person. It’s patient and utterly gorgeous, less concerned with a linear plot or samurai action (though there’s a great sword scene, trust me) and more concerned in conveying the utter humanity a doctor experiences while helping people through the most important moments in life. 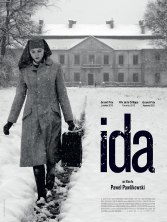 Ida is a story of two separate worlds suddenly becoming one. A young woman, about to take her vows and become a nun, finds out that she is actually Jewish when she goes to visit a distant aunt. The film’s stunning black-and-white photography creates delicious pearly grays– and that’s really what the film is about: shades of gray. Ida, seeped not only in its post-WWII Poland but also its religious context, explores the idea that we know less as we experience more.

Jan Svankmejer’s Alice is not for the faint of heart. This surreal, stop-motion animated adaptation of Alice’s Adventures in Wonderland uses household objects to create the world Alice falls into– the rabbit is taxidermy, tiny Alice is a porcelain doll, and the caterpillar is a sock stuffed with dentures and glass eyeballs. The result is completely mesmerizing– and completely unsettling. This film reminds me that the ordinary can be extraordinary if you only look at it the right way.

This isn’t technically a film, but this television series has to make its way onto my favorites list. I love the 1970 film as well, but there’s something especially wonderful about the TV series, especially after the series becomes a bit more serious in season 4 (and even more especially the episodes written and directed by Alan Alda himself). The show hits a miraculous balance between being hilarious, heartwarming, thought-provoking, heart-breaking, and just downright entertaining.