I made these earlier this week as an experiment, and since then I’ve made them twice more due to popular demand.

These little crostini make a great snack or appetizer or companion to tea. The interplay of flavors really is my favorite part. Upon first bite you immediately taste the sweetness of the honey and pears, and then as you continue to taste gradually the saltiness of the parmesan, toasted flavor from the nuts, and taste of rosemary come through. It starts out as one flavor and then almost completely changes… which has you reaching for a second one.

Also, they’re very easy to make and, unlike a lot of appetizer recipes, the ingredients are easy to get.

Of course, when such simple ingredients are being used, quality is key. A few quick notes on ingredients—first, you can’t make a good crostini without good bread. The times I’ve made this I used a ciabatta baguette from Trader Joe’s and a rosemary baguette loaf from my local grocery store. Try to get something that has that nice outer crust and chewy interior—avoid the flaky/fluffy “French bread” that haunts many grocery store bakeries. Second, use a flaked or shredded parmesan rather than the crumbled wood pulp stuff. The aged flavor of a nice parmesan makes a difference. Lastly, since we all know pears are perfectly ripe for approximately 5 min, this is a great recipe to use over-ripe pears on. Just cut away any bruised bits and don’t worry.

So eat this, binge The Mindy Project or The Unbreakable Kimmy Schmidt before their new seasons start next week, and enjoy.

Preheat oven to 425. Line a cookie sheet with parchment or foil. Slice the baguette into ½ inch slices and spread across baking sheet. Brush each slice with a little bit of oil and then evenly distribute the parmesan cheese across the crostini. Stick in the oven and back for 7-10 minute until bread is toasted and cheese is melted and lightly browned. Transfer them to a cooling rack.

In the meantime, throw the pecans and rosemary into a skillet over medium-high heat and toast. Simply move them constantly with a wooden spoon for about 6 min or until they’re very aromatic. When they’re toasted, transfer them into a bowl and pour the honey over them, stirring until combined.

Thinly slice the pears and put 1-2 slices on each crostini (depending on size of both pear and crostini). Scoop about a generous teaspoon worth of the nut/honey combination on each crostini—you may want to heat up the honey in the microwave for a few minutes to make it more workable, or use two spoons to scoop it like cookie dough. 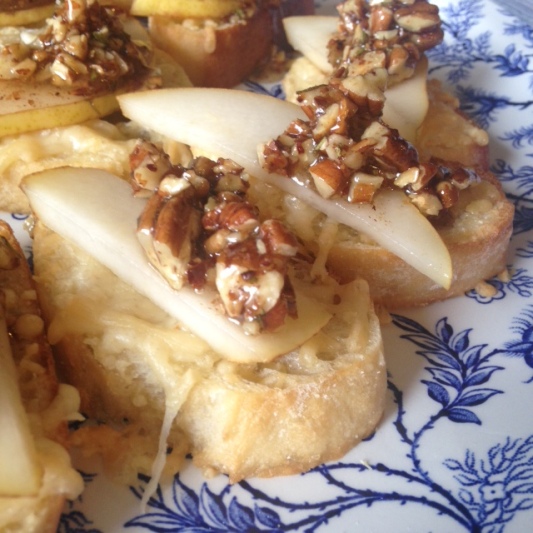 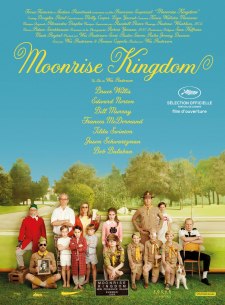 I absolutely adore s’mores, and yet I hate eating them. No matter what, the chocolate isn’t quite melted or the marshmallow is burnt or the graham cracker breaks…

Consequently, many of my favorite recipes are s’mores inspired, but are much more convenient to eat than s’mores. This S’mores Popcorn makes the perfect movie night treat. It’s easy to make, has a great variety of textures, and is family-friendly. 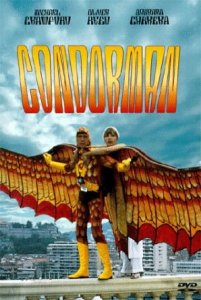 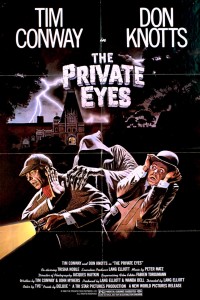 1 c crushed graham crackers (about half a package)

Pop the popcorn on the stovetop in the oil. Transfer popped popcorn to a bowl and lightly salt. Scoop the popcorn onto a parchment-lined cookie sheet, making sure to leave any un-popped kernels in the bowl.

In a separate bowl melt the chocolate chips and shortening in the microwave at 30-second increments. Stir until smooth. (The shortening smooths and thins out the chocolate so that it can be drizzled easily). Set aside to cool.

Transfer tray to the freezer for 10 min or until chocolate is set. Once it is, break up the popcorn into bite-size pieces and put into a bowl for serving!

The popcorn can be put in a airtight container or Ziploc bag for a day before the popcorn starts getting stale. 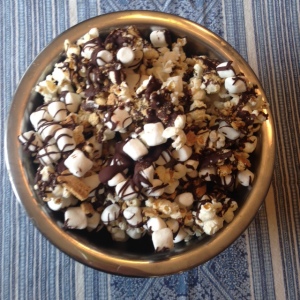 It was officially spring two weeks ago, but today it’s gray and overcast and the wind is biting and even my dog is avoiding going outside.

I love the fresh food and flavors of springtime cooking, but seeing as I’ve spent most of today under an electric blanket, I wanted some sort of comfort food as well. So here’s what I came up with.

This Lemon-Rosemary Gnocchi has the fresh, bright flavors of spring paired with a delicious, warm creamy sauce that makes it perfect for the post-winter-pre-spring blues. The soft gnocchi, indulgent pancetta, and warm cream make a surprisingly wonderful marriage with the bold peas, fresh lemon, and fragrant rosemary. It’s also a quick one-pot dish, which is my favorite kind for so many reasons. 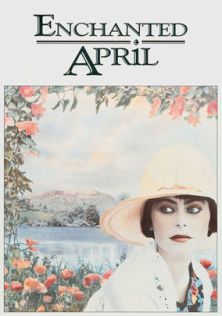 What else to put on the menu? I’d recommend serving with steamed veggies or roasted asparagus on the side. For dessert: a viewing of Enchanted April (1991). This sweet film, in the style of a Merchant-Ivory type production, tells the story of four women escaping the dreary winter who meet while on vacation in Italy. The beautiful surroundings and new friendships revitalize their lives and opens the door for love. A perfect viewing to escape a dreary day.

salt and pepper to taste

Cook the gnocchi according to the package’s instructions. Before straining, collect ¼ cup pasta water. Set pasta and pasta water aside.

Dice the chicken so that it’s roughly the same size as the gnocchi. Heat the olive oil on medium heat in a large pan, and then add the diced chicken along with half the pancetta and half of the garlic. Cook until chicken is lightly browned and the pancetta is crispy. Remove any excess fat and take the cooked meat out of the pan; set aside.

Add the rest of the pancetta and garlic into the pan. Once the pancetta is crispy, add in the butter, lemon zest, and chopped rosemary. Once the butter is melted, add the lemon juice and deglaze the pan. Slowly add the cream, stirring constantly, then sprinkle in the parmesan. Stir until the parmesan is melted and the sauce is creamy. Season with salt and pepper to taste (I just added a few cracks of pepper).

Add the cooked chicken back in, stirring until hot. Then add cooked gnocchi and pasta water. Finally, add the peas and stir until hot.

Serve immediately with a sprinkling of parmesan and lemon zest.

An indulgent documentary series about the interplay between food, people, and places from the director of Jiro Dreams of Sushi.

On May 20, 2012 an earthquake in Modena, Italy not only caused major damage and decimated numerous historical buildings, but had destroyed 360,000 of parmesan wheels—about half of the current Parmesano-Reggiano in production worldwide. Massimo Bottura, owner of the third best restaurant in the world, was asked to try and help find a use for the damaged cheese. His response was Risotto Cacio e Pepe—a simple parmesan risotto recipe designed to have chefs and restaurants buy all the damaged cheese. The recipe caught on—and soon all of the cheese was sold, saving many jobs and cheese makers along the way.

This story gives a glimpse into what the rest of Chef’s Table can offer. The series, created by David Gelb (director of Jiro Dreams of Sushi), is not only about the world’s best chefs and the food they create, but the intrinsic relationships between food, necessity, nostalgia, place, and emotion. As food writer Faith Willinger says in the first episode, “It’s not just about the food—it’s about the whole concept behind the food that makes it far more interesting.” This is exactly what makes the series so captivating—not only are you salivating at these beautifully filmed images of the most renown dishes in the world, you are emotionally involved in the interplay between the food and the people and the places that created them.

Chef Massimo Bottura’s story bounces between Modena, Italy—where food traditions are sacred and he dares to break them—and NY, NY—where he experiments with food and falls in love.

American chef Dan Barber focuses on creating food that is sustainable and creates a kitchen environment of education and support, truly making American cuisine stand on its own.

While Mallmann owns multiple three-Michelin-star restaurants, this episode takes place in the isolated Patagonian Islands—reflecting his own wild, unpredictable philosophies and the ancient traditions from which his food is created.

In the heart of Los Angeles, Niki Nakayama fights boundaries as a female chef developing out of a traditional Japanese family and food traditions.

In a quiet, remote area of Sweden chef Magnus Nilsson uses local ingredients one might hardly call food and transforms them into fantastical culinary creations.

While the food is exquisitely presented and photographed, the series is no cooking show—you won’t see any recipes or instructions on how to make these creations, and there’s certainly no judge. Rather, the series acts as an exploration of creativity—what drives artists and how the way they live their life is exhibited in their work. In fact, their world of top-notch ingredients and 5-star restaurants mimics the world of fine art more than you might think.

Chef’s Table is indulgent and sophisticated—a must-watch for any foodie or cinephile who is craving inspiration. The series creates a meditation on the relationship between the earth that provides the food, the people for which it is a necessity, and the people who have the gall to make a staple of life something imaginative and beautiful. The life-lessons and personal philosophies are what make this series delicious.

Season 2 of Chef’s Table will be released on May 27th.